Introducing faculty to first-time use of Virtual Reality in the Global Languages & Cultures Room.

Over the last few weeks we have run a program of introductory welcome sessions for the Modern Languages Faculty, inviting them to an hour long workshop to familiarize themselves with the new room and some of the technology it contains.

For many this was their first visit to the Global Languages & Cultures Room and it was important to provide a short overview and discuss some of the objectives of the space. This flexible space allows for different configurations of tables and chairs and in this workshop we grouped four units together to make a longer boardroom style table to comfortably sit 8-10 people. Pens are paper were left on the tables and used to record comments, keywords and even to highlight concepts, including time-lines and diagrams.

We talked as a group about the promise of VR, whether they had encountered headsets before. Some people had tried Google Cardboard or Samsung Gear experiences, some reporting how they initially felt some dizziness and disorientation. We talked about how widely the term VR is used in the media and often how it is a short-hand for innovation and new technology. Many of the keywords were technical, thinking about 3D, immersion, transportation, motion sickness – but less about the experience itself or the content they had viewed.

The group tried a variety of experiences, often in pairs with one person watching the (2D) screen and helping to orientate the viewer. There is a particular disconnection between what is viewed externally and what the wearer is actually experiencing. This often lead to miscommunication – “look to your left” “go down a bit” “over there” from the 2D external viewer against “where?” “oh, behind me” “where should I go?” from the wearer. Many were unfamiliar with the controllers and experienced a degree of cognitive overload as they coped with the range of visual stimuli, learning the mechanics of the experience (flying, dragging, zooming etc), understanding the use of  handheld controllers and coping with the limitations of the headset itself. Once over the initial disorientation, many were able to fly and zoom in Google Earth VR, or experience a documentary from one of the many channels – Within or LittleStar or try a game or even the introductory tutorial. This last experience was incredibly useful to many who had never tried on a headset. “The wow factor shouldn’t be denied, it’s pure enjoyment and great fun!” It should be noted too that there was much fun and expression of enjoyment in the room, laughter and amazement.

The sessions with academics were useful for a number of reasons. Almost everyone agreed that these experiences offered a level of engagement, but most could not agree whether this was due to the novelty of wearing the headset and exploring an immersive world; or because content was useful and enjoyable. By far the most important questions raised were about the pedagogic value of VR experiences. We talked about the need to support the wearer, how much of the value of the workshop had come from the facilitation, that wearers needed to reflect on their experiences for them to truly have value, or for the educator to measure the learners’ experience. Finally, there was a broad agreement that content needed to be explored more deeply and that a lack of critical discourse around the content, that some of the documentaries weren’t rich enough to be used as learning objects, for instance many of the travel documentaries betrayed westernized views, a tourist’s experience of a particular place or location. We talked about the opportunity to create bespoke content to be used in teaching and learning and how students on study-abroad programmes might be able to capture 360˚ footage for possible use. There will certainly be more conversations about the practical and technical challenges this would present.
This session was arranged for 82-283 Language Diversity & Cultural Identity, a course exploring contexts of multi-lingualism and how language underpins cultural identiy and shapes regional, local and national politics. This is one of many new courses in Modern Languages taught in English, which aim to provide learners with the tools to understanding theories around linguistic culture. In this session, we introduced the learners to Virtual Reality (VR) and set up a series of Oculus Rift stations to explore Google Earth VR.  Within the experience you can fly around the world, zoom into specific locations, get on street view and have a walk, etc. We then had a nice discussion about VR, their experiences before heading back to the stations to explore commodified language in Pittsburgh. I think there are some really interesting possibilities for learners as well as for the educators in terms of exploring content that is current available but also (and maybe more importantly) creating new content. One student is working on an idea for a senior thesis in linguistics following their visit to the room. Students reflected on the surprising nature of the experience, for all of them, this was their first experience of using VR. They enjoyed the immersion and the sensation of flying in Google Earth, but more importantly appreciated the ability to pinpoint exact locations and explore them from different vantage points. We shared these experiences as a group and it was just as important for the students to enter into discussion and “exit” the experience in a thoughtful way, much like a diver decompressing before rising to the surface. 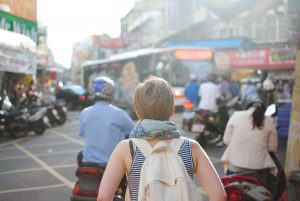